skip to main | skip to sidebar

Tattoo, Nerdery, Aunthood, and Pre-K. I really should update this thing more 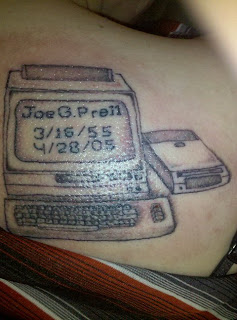 So after being horribly scared of getting a tattoo for years because I am the biggest baby ever I did it. I got a Commodore 64 in memory of my father with his name and birth and death dates on the screen. It was our first computer and a lot of family bonding happened because of that computer and my dad was on the nerdier side and I'm not exactly the least nerdy girl ever. It started as a joke when I suggested it but then the idea grew on me.
I truly must be some sort of masochist. I am signed up for 17 credits this fall. And I just might have one of the nerdiest schedules ever. I am taking Probability Theory, Digital Systems, Data Structures, and Japanese. The Japanese is because I want a class that will make up for the total bombing of calculus and my friend was majoring in it until he decided that one does not need to go to school and he says he'll help me and then he and another co-worker and I can have top secret conversations in Japanese and it'll be super-awesome.
However, the summer is all mine.
I also recently found out that I am going to be an aunt! I'm super-excited since there haven't been any babies in my family since Mini-Geek, who will be attending Pre-K this coming fall. That is, until we get kicked out of Pre-K because he has informed me that if he has to learn with paper he will rip up the paper because for some reason or another learning with paper is a very bad thing.
Posted by Kim at 9:13 AM 2 comments